Alamo Placita, which is named for the park of the same name, means "little cottonwood plaza" in Spanish and is
a historically designated area. The Alamo-Placita neighborhood is bordered by Speer Boulevard to the south and 6th Avenue to the north between Broadway and Downing, while being centered around the park of the same name. Primarily a residential neighborhood, known for its walkability, Alamo Placita is lined with charming homes consisting of Denver Squares, Victorians, Bugalows with Duplexes and Multi-family units mixed in. This centrally located neighborhood gives residents quick access to the other parts of Denver with a quick drive up or down Speer Boulevard. 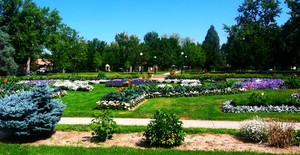 6th Avenue boasts a variety of restaurants and bars along with one of Denver's best independent movie theaters, The Esquire.  Residents also enjoy quick access to and around the Cherry Creek bike trail, located between the two sides of Speer Boulevard that gives bikers easy access to downtown Denver to the north and leads all the way down to Cherry Creek reservoir to the south.